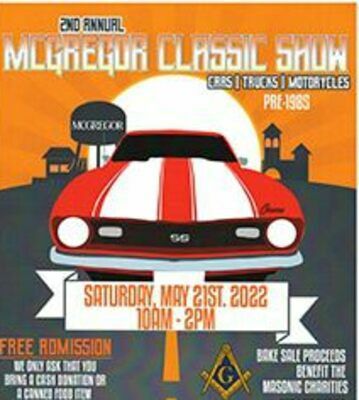 Gearheads and grease monkeys, get ready! McGregor is about to become your very own slice of Heaven.

The Annual McGregor Car Show will roll into the community this Saturday, offering local residents the opportunity to get up close and personal with some of the top classic cars in the area. More than 40 pre-1985 automobiles will be on display at the Exchange Event Center from 10 a.m. to 4 p.m.

“I think we are going to have a pretty large turnout,” said MCS organizer Wayne Copeland. “We have a lot of calls from people who are planning to come.”

The McGregor Classic Show serves a double purpose for Copeland. In addition to giving area residents the chance to see automobiles (as well as trucks and vintage motorcycles) ranging from the Model T to the beloved muscle cars of the 1970s, it also serves a fundraiser for the McGregor Food Pantry.

Cars (and other vehicles) will be on display from 10 a.m. until 2 p.m. Results of the juding, and trophy presentations, will be held after 2 p.m. Trophies for the event are being sponsored by O’Reilly Auto Parts, Jim Turner Chevrolet and Webster’s Cycle Works.

Although there is no admission price for the show, Copeland said he’s asking those attending are asked to bring a non-perishable canned food item or to make a cash donation to the MFP. A year ago, in just its first year, the show generated enough revenue to provide more than a month’s food items.

“It’s a great way to help out a truly beneficial organization,” said Copeland, a former chief of police in McGregor who now who owns Wayne’s Transport and U-Haul and The Propane Station.

In addition to helping fund the Pantry, the Masonic Lodge will be holding a bake sale. The proceeds from the sale will go to the Masonic Charities.